Is Ramen Bad For You?

Ramen noodles are a popular food choice for college students, busy professionals, or people on a budget. And the reason for this is not far-fetched. Ramen is easy to prepare and eat. It is also relatively cheap compared to other food options.

But is ramen bad for you? Yes. There are health risks associated with the consumption of ramen noodles which many people often overlook. Research shows that ramen noodles contain high levels of sodium, MSG, and unhealthy fats, which lead to several health problems.

This article will explain what Ramen noodles are and discuss the dangers associated with consuming Ramen noodles. 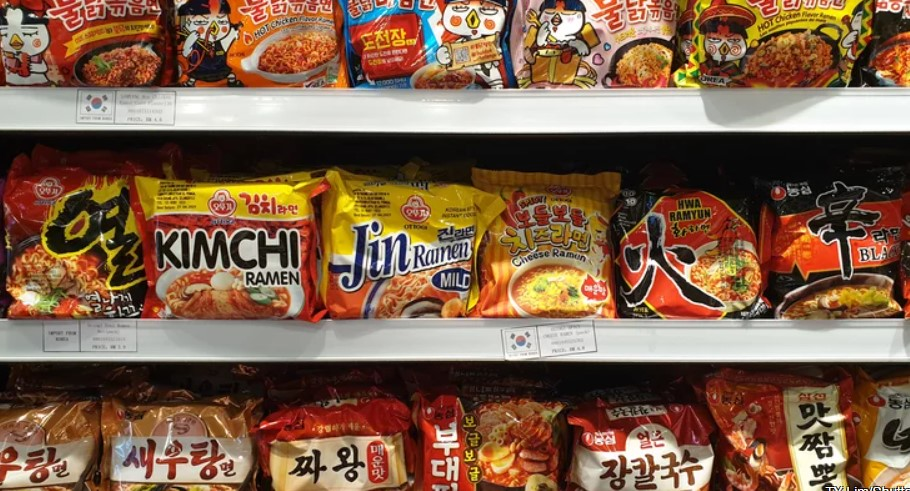 Ramen is a type of instant noodle product, usually sold in a precooked and dried block with flavoring powder or sauce packets. It is also a Japanese noodle dish that consists of Chinese-style wheat noodles served in broth.

Ramen noodles are made from wheat flour, water, salt, and kansui (a type of alkaline mineral water). The dough is extruded and then cut into a noodle shape before the noodles are then steamed and dried. To achieve their distinctive flavor and texture, ramen noodles are often fried before being packaged.

Ramen noodles are a cheap and easy meal option that can be found almost anywhere. They are often considered comfort food and are commonly consumed when people are in a hurry.

Although nutritional values in ramen noodles vary according to the brand, a single package of ramen noodles generally contains the following:

From the nutritional information above, it is easy to deduce that ramen noodles:

Have Too Much Sodium

A diet high in sodium has been linked to an increased risk of cardiovascular disease, stroke, and high blood pressure. The average person should consume no more than 2300 mg of sodium daily, yet a single package of Ramen noodles contains over 800 mg of sodium. That is almost one-third of the recommended daily.

Many processed foods like ramen noodles lack antioxidants and phytochemicals that positively impact health in many ways. They are also high in unhealthy fats, including trans fats and saturated fats, which can increase heart disease risk.

Ramen noodles also contain a food additive called Tertiary-butylhydroquinone (TBHQ), which is a preservative that is used to extend the shelf life of Ramen noodles. TBHQ is a petroleum-based product that has been linked to various health problems like nausea, vomiting, delirium, tinnitus, and collapse.

Monosodium glutamate (MSG) is a flavor enhancer usually added to restaurant foods, soups, deli meats, canned vegetables, and other foods. However, MSG has been linked to several health issues like headaches, nausea, and weakness.

It should be noted that instant ramen noodles differ from fresh ramen noodles, which are traditional Chinese, South Korean, or Japanese noodles, usually served in soup form and topped with nutritious ingredients like eggs, duck meat, and vegetables.

The Risk Factors Of Ramen Noodles

There are several dangers associated with eating instant noodles that many people are unaware of or find hard to believe. These risks include:

Ramen noodles are also associated with weight gain and obesity. This is because they are high in cholesterol, which is a form of saturated fat that can cause excessive weight gain. Instant ramen noodles have fewer amounts of protein and much higher proportions of carbohydrates and fats, and this will lead to weight gain over time.

Ramen noodles have a high glycemic load, which means they can cause your blood sugar levels to spike. A report says that the glycemic index of instant noodles is 52, making it one of the highest glycemic foods. This can be extremely dangerous for people with diabetes or prediabetes as it can lead to serious health complications.

Also, a 2021 study published in the International Journal of Environmental Research and Public Health examined the effect of TBHQ on the immune system’s cell proteins. The report discovered that “TBHQ affected immune cell proteins at doses similar to those that cause harm in traditional studies.”

Ramen noodles can also cause digestion problems because the high sodium content can lead to bloating, gas, and diarrhea. A study was conducted by Dr. Branden Kuo of Massachusetts General Hospital to see the digestive tract after consuming fresh versus instant ramen noodles.

The researcher used a pill camera (one that can be swallowed) and discovered that those who ate instant noodles still had the product in their digestive tract for two hours after ingestion. On the other hand, the fresh noodles seemed almost completely digested. The research was recorded for nearly 32 hours, and it showed the stomach contracting back and forth to grind up the instant ramen noodles.

Also, ramen noodle consumers may experience fluid retention because a single instant ramen noodle pack may contain up to 1700mg of sodium, which can lead to a problem with the body regulating proper fluid levels. Fluid retention can make one feel swollen and lethargic because the body overcompensates the fluid imbalance by retaining excess water.

The plastic packaging of ramen noodles often contains Bisphenol A (BPA), which is a synthetic hormone that can disrupt the endocrine system. BPA has been linked to numerous health problems, such as cancer, infertility, obesity, and heart disease. Also, Bisphenol A (BPA) is reported to cause more harm to women because it can mimic the hormone estrogen and cause problems with the reproductive system.

Ramen noodles are also packaged in Styrofoam, which is made from polystyrene. Polystyrene is a plastic that contains styrene, which is a known carcinogen. When polystyrene is heated, it can release styrene into the food, which can be absorbed by the body and cause health problems.

When you eat ramen noodles, the TBHQ present in them can cause vision problems, such as blurred vision and light sensitivity. A study conducted showed that people who consume a lot of TBHQ can experience eye damage, such as pressure on the optic nerve and changes in brain wave activity.

As stated earlier, ramen noodles are low in nutrients and high in calories, sodium, and fat. This can lead to nutritional deficiencies, such as iron deficiency anemia, vitamin B12 deficiency, and zinc deficiency.

Vitamin B12 is another crucial mineral for the nervous system and the production of red blood cells. Vitamin B12 deficiency can lead to fatigue, weakness, mental confusion, and loss of balance. What this means is that ramen noodles consumers are missing out on key nutrients that are essential for good health.

-Zucchini Noodles: Zucchini noodles are a great alternative to ramen noodles because they are low in calories and carbs. They are also a good source of fiber and vitamins.

-Sweet Potato Noodles: Sweet potato noodles are another great alternative to ramen noodles. They are a good source of fiber, vitamins, and minerals. They are also low in calories and carbs.

-Spaghetti Squash: Spaghetti squash is a healthy alternative to ramen noodles because it is low in calories and carbs. It is also a good source of fiber and vitamins.

Is Ramen Bad For You?

In conclusion, there are many risks associated with the consumption of ramen noodles. These risks include a weakened immune system, digestion problems, increased metabolic syndrome, and other nutritional deficiencies. While ramen noodles may be a quick and easy meal, they are not worth the health risks.

It is best to avoid consuming Ramen noodles and opt for a healthier alternative. Many healthy recipes can be made in a similar amount of time as it takes to cook ramen. By making healthy choices, we can improve our overall health and well-being.

Is 6 Hours Of Sleep Enough?

It’s no secret that getting enough sleep is important for our overall health and well-being. But is 6 hours of sleep enough? Can we really get by on that amount of sleep each night? Let’s take a look at the pros and cons of this seemingly small amount of shut-eye and...

What Are The Benefits Of Haritaki?

Are you looking for a natural health solution that can help improve your overall well-being? If so, you may want to consider adding Haritaki to your routine. This powerful herb has a variety of benefits that can help boost your health and vitality. Keep reading to...

What Are The Benefits Of A Fruit Diet?

When it comes to diets, there are many food diet options that people can choose from. However, it is always better to stick to a healthy, balanced diet that includes lots of fruit groups. A fruit diet is one such type of diet where the emphasis is on eating only...

UNLOCK
$5 OFF
YOUR FIRST ORDER

You have Successfully Subscribed!